A P Udayabhanu – Chairman of the Kerala Government Prohibition Commission

A P Udayabhanu is a Freedom fighter, social reformer, Congress leader, ex-MLA, advocate, chief- editor, environmentalist, litterateu too. He was born at Muttom near Haripad, on October 1, 1915. He had his B.A. and B.L. degrees from Travancore University. A.P. Udayabhanu was elected to the Travancore Legislative Assembly twice, in 1944 and 1948. Also he was the President of Thiru- Kochi Pradesh Congress Committee and secretary to Travancore State Congress. A veteran social worker, A.P. Udayabhanu was a member of the Kerala Public Service Commission and also the managing committee president of Thonnaykkal Kumaranasan Memorial Trust. He worked as the chief- editor of “Prabodham”, “Deenabandhu” and “Mathrubhoomi” newspapers. For about a decade from 1969 onwards, Udayabhanu held the position of Mathrubhoomi- Kozhikkode edition’s Resident Editor. 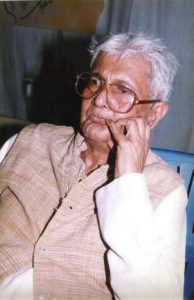 In 1933, A.P. Udayabhanu was awarded the Kerala Sahithya Academy Award for life time contributions and the first Swadeshabhimani Award for his contributions to the domain of journalism. He also received the Pathradhipar K. Sukumaran Memorial Award in 1995 and the C. Achyutha Menon Award. The noble soul passed away on December 15, 1999.