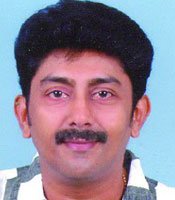 Actor Ashokan made his debut in 1979 in Peruvazhiyambalam, directed by Padmarajan, where he played a 15-year-old boy who becomes a fugitive after killing a bully. This was followed by star turns in Padmarajan’s films Arappatta Kettiya Gramathil, Thoovanathumbikal and Moonnam Pakkam. He did the main role in Anantaram a film by Adoor Gopalakrishnan. He acted in the NFDC film Parinamam , directed by P. Venu that won the Best Screenplay Award in the Ashdod International Film Festival held in Israel. In his early career he aspired to be a playback singer. With a clear talent for singing, he has hosted various film-song-based programs on television. He has acted in an number of popular Malayalam films and is good singer.