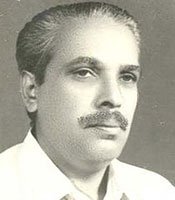 Chembakasseril Balakrishna Chandrasekhara Warrier(CBC WARRIER) (30 October 1932 – 7 June 2013) was an Indian political leader of the Communist Party of India (Marxist) and a member of Kerala Legislative Assembly for 12 years. Known to the political circle as C. B. C., he was elected as a Member of Legislative Assembly in 4th and 6th term of Kerala State Legislative Assembly. He was a Bachelor of Law Graduate and had held positions of Chairman, Public Accounts Committee (1974–75) and Committee on Estimates (1980–82). He was also active in trade union movements.

Was born in Haripad and completed his schooling in Karuvatta NSS school, Haripad in 1947. Pre-university studies he completed in Trivandrum and he continued his higher studies at University College Trivandrum. CBC was active in students movements and union elections in college.