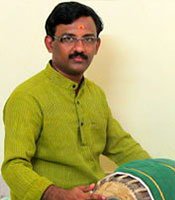 Erickavu N Sunil was born (on 15 March 1977) to K. Narayana Panicker and V. Saraswathi Amma in Haripad, Kerala, India. Started learning the Mridangam at the age of four. His initial Gurus were Late Krishnappa Bhagavathar and M S Raju. He had his advanced studies in mridangam from the Legendary Maestro Late Professor Mavelikkara Velukkutty Nair.

His schooling was at St. Thomas High School, Karthikappally (near Haripad). He completed his Bachelor of Science degree in Physics from Mar Ivanios College, Trivandrum in 1997. He also completed Master of Computer Applications(MCA) degree from College of Engineering, Trivandrum in 2002. He is an A grade Mridangam Artist in All India Radio and Doordharshan and has received numerous Awards including the prestigious “Chembai Award” (the award given to outstanding young Mridangam Artist) by Chembai Memorial Trust, Trivandrum in 2006 and Junior Research Fellowship by the Department of Culture, Government of India in 2013 etc.