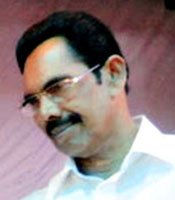 Karuvatta Chandran was awarded the President’s and   State Government’s awards for the best teacher. He is   also a renowned playwriter, comic writer, social worker   and educationalist.

He also wrote the screenplay for two movies – Dronar   (Malayalam) and Villalal (Tamil). Several plays of him   have been broadcast on the All India Radio.He has created several popular cartoons, comics and illustrated stories. Over 2800 of his creations of this genre have been published in various Malayalam periodicals like Manorama weekly, Manorajyam, Kerala Kaumudi and Deepika. ‘Naranathu Bhranthan’, the comic series was published in the Manorajyam weekly for a period of twentyfive years. So far authored sixteen short stories that have been published in Malayala Manorama weekly.