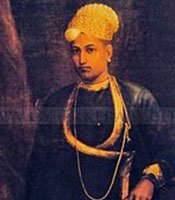 Kerala Varma Valiya Koil Thampuran (19 February   1845 – 22 September 1914) also spelt also known   as Kerala Varma, was a Malayalam – language poet   and translator in English and Sanskrit. He was part   of the royal family of erstwhile Parappanad,   Malabar.  Kerala Varma is also known as the           Kalidasa of Kerala. He was born in Changanacherry   at the Laxmipuram Palace.Mother was Pooram Nal Devi Amba Thampuratti while his father was Cheriyoor Mullapally Narayanan Namboothiri, Perinchelloor Gramam (Taliparamba) in Kannur District. His family had fled Malabar and sought refuge in Travancore during the invasion of Tipu Sultan towards the end of the 18th century.

His family subsequently moved to Haripad and settled at the Ananthapuram Palace. In 1859 he was married to Her Highness Bharani Thirunal Lakshmi Bayi, the adopted niece of Uthram Thirunal, then Maharajah of Travancore. Later, however, through palace intrigues and personal disaffection with the Maharajah Ayilyam Thirunal he was confined at Haripad forcefully in 1875, only to be released and reunited with his wife in 1880 by Maharajah Visakham Thirunal. He was made a Companion of the Order of the Star of India in 1885 by the British Government. After the death of his consort Rani Lakshmi Bayi in 1901 he was appointed the guardian of her two grandnieces, the Senior and Junior Ranis of Travancore, including Maharani Sethu Lakshmi Bayi.

Kerala Varma was in close touch with literary movements in both northern and southern parts of Kerala, including Bhashaposhini Sabha and magazines such as Vidya Vinodini and Malayala Manorama. His work Abhijnana Sakunthalam(1898), a translation of Kalidasa’s Sakunthalam, is one of the most acclaimed works of poetry in Malayalam from that period. It influenced a number of other translations of Sanskrit classics into Malayalam and was a success on the stage.

He has also written Mayoorasandesham on the line of Kalidasa’s MeghaDooth. In this poetry he has used the peacocks of Haripad temple to send his messages to his wife, the Maharani, in Trivandrum. His celebrated work Visakhavijaya was written after his release by Visakham Thirunal.He died in a car accident in September 1914.