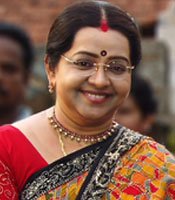 The 1974 Malayalam film Utharayanam by G. Aravindan was her first film. Since then, Mallika Sukumaran has appeared in over 60 films. She won the Kerala State Film award for Second Best Actress for her role in the 1974 film Swapnadanam.Her husband Sukumaran is famous movie actor. Two sons Indrajith the elder and Prithviraj are also Movie artists.

Her first appearance in television was in a tele-serial. She won the Second Best Actress Award in the Kaveri Film Critics Television Awards (2004) for her role in the serial American Dreams.She is well-known for her comedic roles as well as her antagonistic roles.She has acted in some advertisements and participated in some talk shows and game shows.