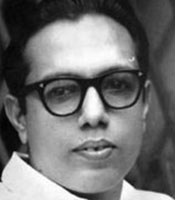 P.V. Thampi, was born on April 28, 1937, at Haripad, as the son of Bhavani Thankachi and P. Krishnapillai. In a very short span of time he established his versatility as a novelist, short story writer, essayist and elocutionist.  began his career at the age of 19 at the New India Insurance.

P.V. Thampi passed M.A. and L.L.B. while he was in the service. He gave up his job in March 1988 as the job proved to be an obstacle to his literary creativities. His first novel “Homam” got the ‘Kumkumam Award’ in 1979. His essay in English ‘The Reorganization of Soviet Union’ bagged him the Soviet Award for the best essay, at international level in 1988.  His major works include ‘Karmabandhanam’, ‘Athmavrithantham’, ‘Bhraanthi’, ‘Agnirathi’, ‘Avatharam’, ‘Aksharapooja, ‘Anandabhairavi’, ‘Kasthuri’, ‘Krishnapparunthu’, ‘Pallivetta’, ‘Ticket please’ and ‘Sapthaham’. A few of them were made into films. He was a renowned advocate too.

P V Thampi,worked in the capacity of the Kerala Bar Council Chairman. Renowned lyricist and film- maker Sreekumaran Thampi is one of his brothers. P.V. Thampy passed away at the age of 71, following a cardiac arrest. He spent his last days at Haripad.