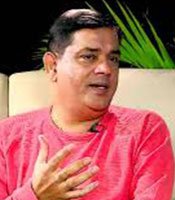 Sanjeev Sivan, brother of cinematographer-director Santhosh Sivan and a graduate of New York University, has designed and executed numerous films in India and abroad. He has made several short films, commercials and Malayalam language features. His latest Malayalam feature film, “Aparichithan-The Stranger,” broke all box office records in the Malayalam film industry, and he is discussing with Bollywood film producers for a Hindi remake of the movie.

Sanjeev Sivan also co-produced the multi award-winning feature “The Terrorist,” directed by his brother Santosh Sivan, and was invited to screen it at more than 40 international film festivals including Cannes and Sundance. The film went on to win all major awards at the Cairo Film Festival, where the jury was chaired by noted American actor/director John Malkovich. Sivan and Malkovich collaborated on releasing the film in North America. The Sivan brothers also worked together on the popular movie “Asoka,” starring and funded by Bollywood superstar Shah Rukh Khan. Sanjeev Sivan is now in pre-production for his dream project, an international collaboration with a British company on a film titled “Waiting for Clinton.”