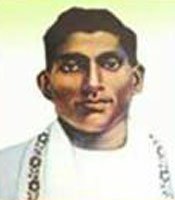 T. K. Madhavan (2 September 1885 – 27 April 1930) was a social reformer, journalist and revolutionary who was involved with the Sree Narayana Dharma Paripalana (SNDP). He led the struggle against untouchability which was known as Vaikom Satyagraha. Madhavan was born on at Karthikappally, son of Kesavan Channar of Alummoottil family and Ummini Amma of Komalezhathu family. Alummoottil family was one of the wealthiest in the state of Travancore that time.

In 1917 he took over the daily newspaper, Desabhimani. T K Madahavan took part in the Temple Entry Movement, which fought for the entry of suppressed and low-caste communities to the temples of Kerala. In 1918 Madhavan was elected to the Sree Moolam Praja Sabha, a legislative council of Travancore. In the same year he made his maiden speech at the Sree Moolam Assembly instead of his uncle Komalezhathu Kunjupillai Chekavar. He presented a resolution seeking permission of temple entry and right to worship to all people irrespective of caste and community. The resolution was presented in the kakkinada session of Indian National Congress in 1923. In 1924, Vaikom Sathyagraha was started under the leadership of Madhavan, K. Kelappan, and K.P.Kesava Menon to get the right of oppressed class of people to travel through the road in front of Vaikom Mahadeva temple. T K Madhavan and Kesava Menon were arrested and imprisoned. Finally, the Maharaja of Travancore agreed to open the road to all class of people and the Vaikom Sathyagraha was a great success. However, he continued his struggle for the temple entry. In 1927 he was made organizing secretary of the SNDP Yogam. T.K Madhavan formed a voluntary organization “Dharma Bhata Sangham” to strengthen the activities of SNDP Yogam. He met Mahathma Gandhi at Tirunelveli, and persuaded him to visit Vaikom. Vaikom Satyagraha was a struggle for establishing the right for backward class people to walk through the temple roads of Vaikom, a small temple town in north west of Kottayam. Gandhiji agreed to include the issue in the agenda of the Indian National Congress.