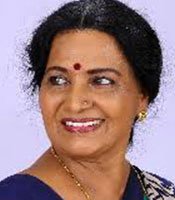 Sreelatha Namboothiri is an Indian film actress best known for her work in Malayalam cinema. She acted in more than 200 films. Her Debut movie was Khadeeja in 1967. She paired up with Adoor Bhasi in most of her films and they portrayed a comedy couple.

Sreelatha was born as Vasantha, in Karuvatta 0n 11 March 1946. Her father Aanjilivelil Balakrishnan Nair was an army officer and mother, Kamalamma was a music teacher in Government school. She has four younger brothers. Yesteryear actress Kumari Thankam is her father’s sister. Her primary education was at Govt. Girls High School, Haripad. She was an athlete while at school. She bagged second prize for long jump twice at state level. She joined K.P.A.C.(Kerala People’s Arts Club), when she was studying in seventh grade, as a singer and later started performing drama in many stages. She couldn’t continue her studies after that. She learned classical music from Dakshinamurthy.

Her husband Dr. Kaladi Parameshwaran Namboothiri, known as Kaladi Namboothiri, an actor and Ayurveda doctor and in 1979. They both acted together in Papathinu Maranamilla, a 1979 Malayalam movie. She took a break from movies after marriage and settled in Kunnamkulam, Thrissur. After her marriage to Dr. Namboothiri, she converted to Brahmin community and became an Antharjanam. She currently resides at Thiruvananthapuram.