Alappuzha Beach is known for its vast endless stretches. The remains of Alappuzha Sea Bridge narrate the tales of those times when Alappuzha was one of the most famous and important port destinations in the state of Kerala. The bridge was used for the passage of goods through ships 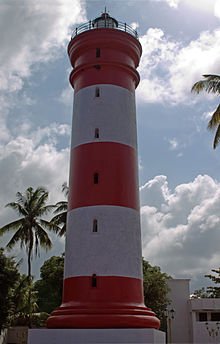 that time. Vijay Park situated there is a hub for couples and those who wish to have some solitary time. The beach is often referred to as the ‘Venice of the East’ owing to its romantic location and popularity among European countries. The beach is also unique for its importance in the maritime history of Kerala. Alappuzha lighthouse situated in Alappuzha beach was built in 1862 and is a major tourist attraction. Visitors are allowed between 1500 hours and 1630 hours on every weekday at an admission fee of 20 rupees for Indian citizens and 50 rupees for foreigners. Alapuzha Beach is 34 Km away from Haripad.