Protest over death of temple elephant in Ambalapuzha 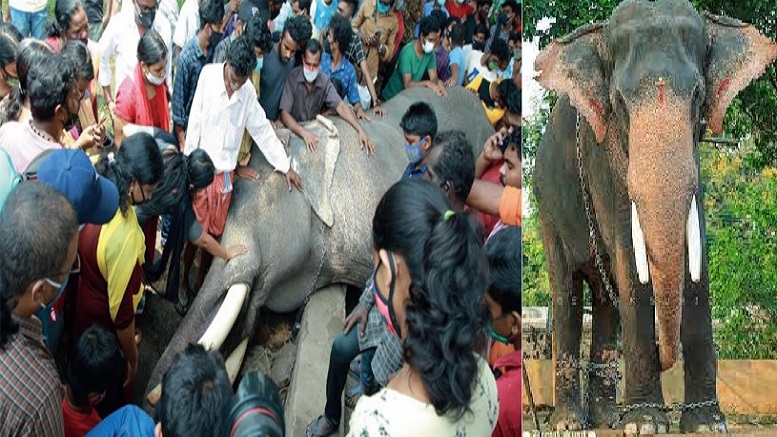 A temple elephant named Ambalapuzha Vijayakrishnan was allegedly tortured and killed by the TDB(Travancore Devaswom Board) authorities at Alappuzha in Kerala. Vijayakrishnan’s fans swelled the premises in sorrow and it turned to rage against the erring authorities. N Vasu, the Devaswom Board President, deployed by the communist regime to calm things faced stiff resistance when he visited the Shri Krishna Temple and was pelted with chappals by irate locals.

Had the local police deployed there not intervened in this extraction he would have ended up in a hospital, or worse. Hindu Keralites love their domesticated elephants with huge tuskers, especially the ones that are deployed in temple festivals. such elephants even have fan clubs and follow the elephant anywhere he goes. Infants are nurtured and raised with active participation from the public.

Vijayakrishnan was continuously paraded, neglecting his deteriorating health with the consent of the veterinary doctor even though he had serious injuries, especially on his front right leg and he could barely walk. It is also alleged that this injury was inflicted by its mahout using sharp knives. The TDB deputy commissioner who approved the elephant’s movement from one temple to another has been suspended. Vijayakrishnan’s fans had complained following which forest officials intervened and brought it back to Ambalapuzha but the damage had been done and it succumbed to its injuries.

That they cost a lot to maintain is taken for granted and citizens donate for his upkeep. The communists figure them as mere temple assets that they can pawn, often against the wishes of the elephant itself and this is exactly what happened at Ambalappuzha.

Temple festivals last anywhere from a single day to weeks. Elephants attract crowds of devotees, especially the young ones. Children adore them and queue up to see one. The flip side is that elephants are now forced to attend such festivals indiscriminately and once the elephant starts to show its displeasure, the communist cadre who masquerade as Hindu mahouts make sure that it is killed.

The Authentic Karkitaka Chikitsa package (Monsoon Treatments): Everything you need to know about it!