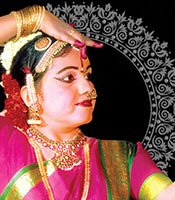 S Lekha Thankachi was born in a reputed family of performing artists. She learned dancing at the tender age of seven. The initial lessons in classical dance were taken from Sri.Ambalappuzha Krishnankutty Master, at his dance school attached to the Kanichukulangara Temple. Acquiring a firm platform in classical dance, she joined the Sri Swathi Thirunal Colege of Music inThiruvananthapuram, for the Natanabhooshanam Diploma Course in 1967. This helped in getting exposure to Kerala Natanam, the unique dance form of Kerala. She had the fortune of learning this art from leading exponents such as Sri.Sankarankutty, Sri.Tripunithura Vijayabhanu, Smt.K.Saraswathy Amma and Smt.Subhadramma. She also gained her Bharata Natyam knowledge from the renowned maestro Sri. Nattuvam Paramasiva Menon. A briliant student, she completed the diploma with first rank. Her “arangettam” (debut) in Kerala Natanam was held in 1970 at VJT Hall, Thiruvananthapuram under the supervision of her Guru, Sri.Tripunithura Vijayabhanu. This was followed by several performances across the country. In the year 1978, she joined Sri Swathi Thirunal Government College of Music, in its Department of Dance as a Tutor. She rounded off her formal education with a Bachelor’s degree in performing arts from Kerala University. She headed Department of Dance from 1998 until her retirement. Apart from being an academic of eminence, she has also contributed substantially to the growth and popularization of Kerala Natanam. She has conducted several workshops on various topics related to Kerala Natanam in different venues across the country. She has been a member of the academic committees set up for making the syllabus of BPA and MPA courses. She has been a keen member for designing unique costumes for Kerala Natanam. As a choreographer she has composed various dance, drama and balet shows and has given more than 800 performances in Kerala and other states, organized under the auspices of Sudharsana Nritha Kala Nilayam, Haripad, Kerala. She was awarded the title NATYA JYOTHI by Kaladarpanam in the year 2003. In recognition of her contributions to Kerala Natanam, the Kerala Sangeetha Nataka Academy gave her the best classical dancer (Kerala Natanam) was award in the year 2008.